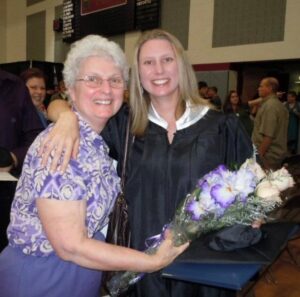 Two-time alumna Tanya Vigunas Freiberg began her career in health care in 2004, working as a Nurse’s Aid at Penn Medicine Lancaster General Hospital.  Looking to advance into nursing, she enrolled in PA College, earning her Associate of Science in Nursing (ASN) degree in 2012, and her Bachelor of Science in Nursing degree seven years later.  As an RN, Tanya worked in the Trauma Neuro ICU at Lancaster General Hospital for seven years, before moving to the Critical Care Supplemental Staff in 2018.

Now enrolled in the Psychiatric/Mental Health specialty track of our Master of Science in Nursing – Nurse Practitioner program, Tanya is following a passion sparked earlier in life. Before starting at Lancaster General Hospital, she worked in the community with adults with intellectual disabilities and mental illness. She enjoyed working with this population and always felt she would find her way back to this type of work. Tanya explains: “I am eager to help people affected by mental illness and promote mental health. I hope to work with children and adolescents to help them heal as well as learn healthy coping and emotional wellbeing.”

When asked to describe her health care hero, Tanya shares that she is inspired by all the wonderful health care professionals she has been privileged to work with and is always learning from her knowledgeable and caring colleagues.  Yet, she points to her grandmother, Barbara Keener Reed, RN ’55 as the person who very much encouraged and influenced her to become a nurse. Tanya explains: “When I was in the ASN program, my grandmother prayed that I would get to do my psychiatric nursing rotation at Philhaven where she worked as a psychiatric nurse. She actually waited to fully retire so that we could have the opportunity to be there together. After graduating, I was eager to work in the hospital Trauma Neuro ICU because I enjoyed neurology. Over the years I took care of many patients with mental illness and substance abuse disorders, and I never forgot my time as a nursing student a Philhaven. It was here that a passion to work with adolescents experiencing mental illness was ignited. My grandmother helped ensure I would have that experience and be under her wing to learn what she had through her years as a psychiatric nurse.” (To learn more about Barbara, read her Alumni Profile, below.) 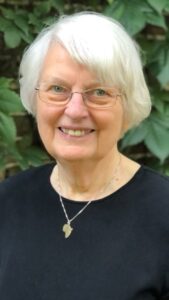 “My education equipped me for meaningful work, self-sufficiency and offered a sense of dignity,” shares alumna Barbara Keener Reed, RN ’55 of her studies at the Lancaster General Hospital School of Nursing (now PA College). It was also the start of a series of life experiences that would expand her world view, as she began to interact with patients and professional staff whose cultures and outlook differed from her own. After graduation, Barbara married and moved to Chester, PA where she worked as a staff nurse at Crozier Hospital, before becoming a stay-at-home mom in 1957.

After spending fourteen-years in missionary service in Somalia, with her growing family and minimal opportunities for active nursing duty, Barbara felt apprehensive about re-entering the profession on returning to the United States. However, knowledge and skills were not lost, and Barbara thrived in mental health nursing at Philhaven Hospital (now WellSpan Philhaven). This specialty proved to be a wonderful fit, and even after her retirement, Barbara continued to work PRN (as needed) until past her 78th birthday.  She adds: “Among many treasured memories is that of a former patient, encountered in other circumstances, who remembered me and initiated conversation. The change in her was so remarkable I would never have guessed her to be the same person!”

Barbara also pursued another passion on the side, working in case management for a program affording safe shelter for victims of domestic violence. Some women with histories of abuse or drug addiction, whom she met through church, also began to confide in her. This spurred Barbara on to enroll in studies in Marriage and Family Therapy, Marriage Therapy and Pre-Marriage Counseling.  She notes: “I was not qualified to ‘hang out a shingle’ but gained more understanding and skills, so I happily helped on a volunteer basis those seeking my counsel. If I were young today, I would most likely aim to become a clinical marriage and family therapist.” In retirement, volunteer opportunities to speak about her husband’s and her lived experience with his Alzheimer’s Disease have been most rewarding. Among the hundreds of listeners were chaplains, pastors, family caregivers and student nurses at her local community college.

Barbara has lived independently at Landis Homes since 2007, first with her husband who died in December 2017. She enjoys walking within the community’s campus, reading, playing Scrabble, scrapbooking and traveling. “Family is first in my interests,” adds Barbara, who is especially proud that her granddaughter, Tanya Vigunas Freiberg ’12 ’19, a two-time alumna and current PA College MSN program student has followed in her footsteps. (To learn more about Tanya, read her Student Profile, above.) Barbara published a memoir last year, entitled Standing on Holy Ground and Some Not So Holy (most of the first chapter can be read here).