“Accreditation and certification validate the quality and integrity of our programs, and confirm for our students and the community that our programs provide excellence in education and practice,” said Dr. Jean Hershey, vice president of academic affairs at Pennsylvania College of Health Sciences. “We are so proud of the positive program outcomes we received, and look forward to continuing our efforts in providing leading education to our future healthcare workforce.”

The Bachelor of Science in Nursing program received continued accreditation from the Commission on Collegiate Nursing Education (CCNE) for a period of 10 years. Reaccreditation will be due in 2032.

The Post-graduate APRN certificate program received accreditation from the Commission on Collegiate Nursing Education (CCNE) for a period of 10 years. Reaccreditation will be due in 2032.

The Master of Science in Nursing program received continued accreditation from the Commission on Collegiate Nursing Education (CCNE) for a period of 10 years. Reaccreditation will be due in 2032.

“As the healthcare field continues to evolve post-pandemic, it’s our responsibility and vision to make sure we’re providing the most up-to-date and comprehensive academic programs to prepare our students for their prospective careers,” said Dr. Mary Grace Simcox, president of Pennsylvania College of Health Sciences. “The reaccreditation process requires extensive time and research from our faculty and staff, and our results are a testament that our students are receiving the state-of-the-art education we strive to deliver.” 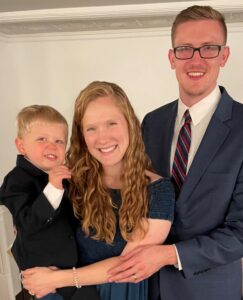 “My entire college career has been at PA College,” shares Jesse Fillgrove, a current graduate student and soon to be three-time alumnus.  After earning his Associate of Science in Nursing degree in 2014, Jesse worked for two years before returning to PA College to earn his Bachelor of Science in Nursing degree in 2019.  Now in his final semester of our Master of Science in Nursing – Administration program, Jesse is excited to earn his third PA College degree next month. He shares: “The highlight of my graduate studies was the 12-week applied practice experience. I spent one day a week shadowing the Chief Nursing Officer (CNO) for Penn Medicine Lancaster General Hospital, Dr. Larry Strassner. It was a genuinely life changing experience. It opened my eyes to the breadth of oversight a CNO has in a health care organization. Every time I thought understood all the CNO oversees, there was something new.”

Last month, Jesse was promoted to Nurse Manager for the Transitional/Discharge Unit (TDU) at Lancaster General Hospital – the same unit where he started as a bedside nurse.  Jesse notes: “The TDU is a newer concept in our institution. We help patients who, for whatever reason, have nowhere to go after they leave the hospital. We transform lives through nursing care. Sometimes that means behavioral management, but other times it means collaborating with interprofessional teams, or simply documenting in a way that promotes the patient’s well-being.” Previously, Jesse was the Assistant Nurse Manager on the Neuroscience/Trauma Med/Surg unit at the hospital.

Jesse points to two health care heroes in his life. The first, Michael Killinger, Regional Director for Operations, was Jesse’s operational director when he started in management at Lancaster General Hospital. Jesse adds: “Mike has a way of connecting with people and valuing individuals like no one else. He is the greatest authentic leader I know. I model the way I care, connect and lead after Mike.”  Jesse’s second health care hero is his wife, Karyn, an Emergency Department Nurse at Lancaster General Hospital. Jesse and Karen live in Lancaster City with their son, Samuel and are looking forward to the arrival of their second child in January. 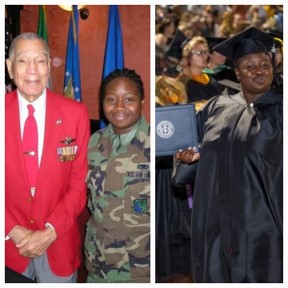 Alumna and veteran LaTia Forner served in the United States Air Force on active duty from 2002 to 2010. Working in aircraft maintenance and repair of fuel systems, she serviced the pumps and valves that manage and deliver aviation fuel to the propulsion system and auxiliary power unit of an aircraft. Later, with the support of educational benefits through the Post-9/11 GI Bill and Vocational Rehabilitation benefits, LaTia was able to enroll in our Vascular Sonography program. “My educational goals wouldn’t have been possible without my time in the service,” she shares. “And I found that aircraft fuel system maintenance is very similar to the study of hemodynamics and hemorheology within the human body.”

LaTia’s favorite PA College clinical experience was at the Penn State Health Milton S. Hershey Vascular Sonography laboratory under the leadership of Michael Matchett. She explains: “As a teaching hospital with a high volume of vascular disease patients, I was able to develop my skills with a diverse patient population.” She is also grateful to her clinical preceptor, Senior Vascular Sonography Karen Lahr at Penn State Health Lancaster Medical Center who LaTia explains “was a critical part in developing and building upon my skills from studies in open lab.”  She values the support of PA College Instructor, Kathryn Zale who provided counseling and strategies to overcome challenges LaTia faced due to dyslexia and who shared her belief that “we shouldn’t limit ourselves to other people’s expectations of us.”

As a recent graduate, LaTia is already making an impact in the health care profession. She works in the Vascular Laboratory at UPMC Hanover and participates in surgical procedures in the hospital’s catheterization laboratory twice a week. She notes: “Some surgical procedures are ultrasound guided as in a venous ablation procedure that utilizes radiofrequency energy to cauterize and close bad veins in the legs.”  LaTia recognizes that minority communities do not always receive the same quality of care that Caucasian patients do and can be unsatisfied with their interactions with health care providers. She hopes to make a positive impact through her work within her minority community.  It is her goal to one day manage a Sonography department for patients from an undeserved community (veterans or African Americans).

Photo: at left – LaTia with Tuskegee Airman, Lieutenant Colonel Lee Archer; and at right – LaTia at Commencement, May 2022

No comments to show.